What is Trailing Stop? 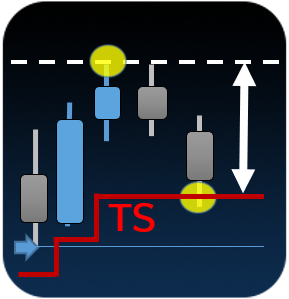 Trailing Stop is an element that generates the condition when the Price goes back a certain amount of points after reaching new maximums.

We have to imagine the trailing stop as a stair for our losses level. The Trailing Stop is going to climb steps if the price moves in the same direction

This way, we have an element that covers the benefits when the price follows the direction of the order

To understand this concept we have an example in the following graph:

Let us suppose that we open a buyout, with a level of initial losses drawn in red. To start using the trailing stop, we draw a blue line.

When the price reaches the level of the blue line, it activates the trailing stop. The “stair” starts moving which means that the level of exit is moving. This level goes up each time that the candles reach a new maximum. Over this maximum, it is projected the distance of points where the level must be situated.

The trailing stop event ends if the price achieves new maximums, turns around, and finally reaches the exit level.

(Note: The level is updated with new maximums for buyouts. In case of sales, it would be the same applied with new minimums)

Trailing Stop is an element especially good for tending strategies or for those where we do not want to establish a fixed level of profit, to let the price fluctuate, and secure profits.

However, you have to be precise with the margin distance. If the distance is too close to the price, the operation will be closed very fast, losing opportunities for good stretches. Otherwise, if the distance is too far, it will not cover enough the profits, so if the price turns around the exit will be too late.

Analyse the asset and the timeframe where you want to use the trailing stop, measure the average variation of the candles and apply at least 2,5 times those average in pips. From there, finish calibrating increasing/reducing the points to obtain the optimal result.